If you need solid legal advice specific to your part of Minnesota and representation that knows how to deal with personal injury claims and insurance companies after you’ve been a victim of an accident then LegalFinders can help. If you sustained personal injuries because of a truck collision accident, contact us and you’ll receive a free consultation today. It doesn’t matter if you’re in Bloomington or Woodbury, if you have medical bills after a truck accident, you may be entitled to fair compensation for catastrophic injuries. Reach out, today. 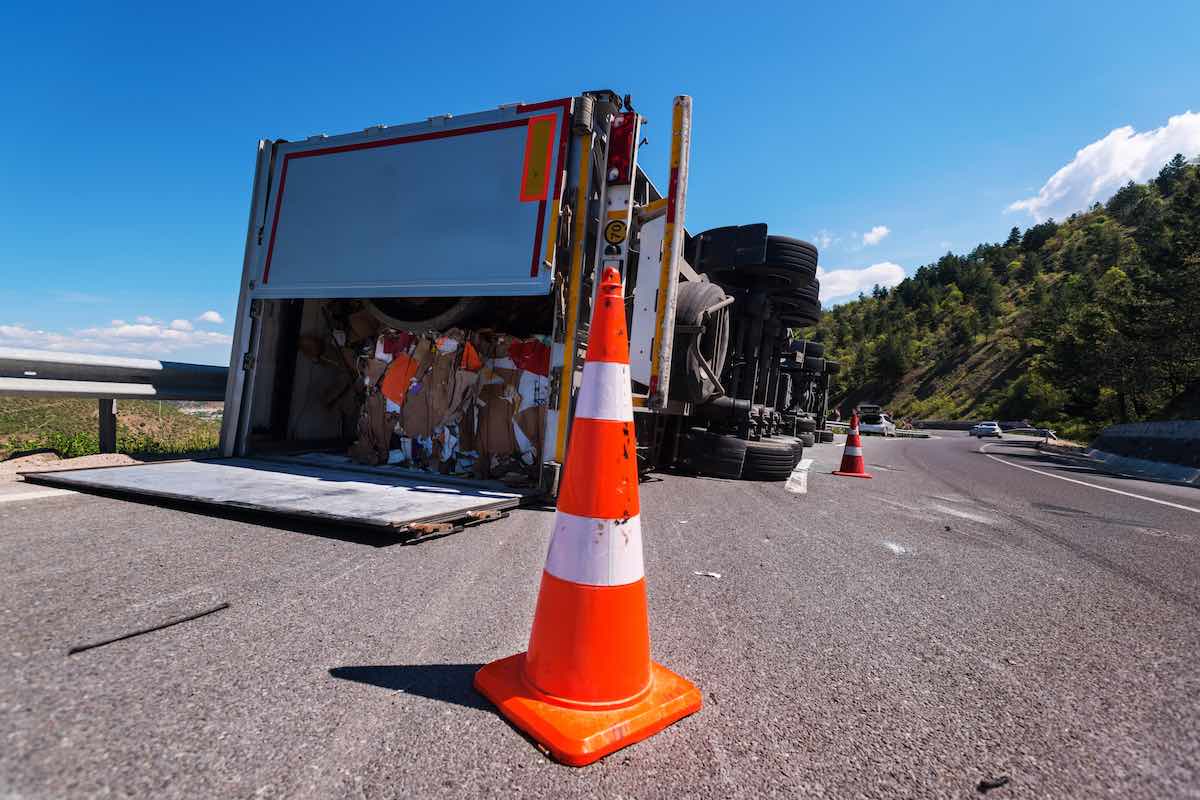 Minnesota is located in the Midwest of the US and is known for its wide prairies, many lakes, and deciduous forests that cover a third of the state. With such a range of geographical features, roadways vary in condition and structure. The state is also known for its twin cities of Minneapolis-St. Paul which are urbanized areas that are home to a population of over 4 million. Over the course of its history, passenger rail, highways, and railroads have all been integral travel infrastructure that continues to expand in growth.

Known as the Land of 10,000 Lakes, Minnesota is also a major hub for trading as the largest producer of sugar beets, sweet corn, peas, and farm-raised turkeys. As a result, there is a need for trucking transportation services to keep up with the high demand of interstate commerce.

There are over 135,000 miles of public roadway in Minnesota that support the transportation of goods long-distance. There are also upwards of 34,000 truck drivers in Minnesota, which leaves many large vehicles on the road consistently. A standard passenger vehicle is extremely vulnerable to a collision but especially when encountering a commercial truck. According to the Minnesota Department of Public Safety, in 2021 there were 1,559 injuries sustained due to semi-trailer truck crashes.

LegalFinders is here and ready to connect you to the best personal injury accident lawyers in your part of Minnesota. If you’ve been involved in a crash we can lead you to one of our accident attorneys who has experience with truck collisions and personal injury claims. Our great network of capable legal professionals and attorneys will ensure that you are more than adequately represented, just call LegalFinders today to find out how.

According to the Minnesota Office of Traffic Safety fatalities rose in 2020 as there were 394 deaths as compared to 364 in 2019. As it stands, Minnesota did not meet their traffic fatality goals during their Safety Performance Target Assessment. The number of deaths is the highest since 2015.

Also according to the Minnesota Department of Public Safety, the COVID-19 pandemic did keep many quarantined. Yet despite the fewer number of overall motor vehicle crashes throughout 2020 fatal crash numbers increased because of speeding, unbelted motorists, and drivers who were under the influence. Speeding increases mean that you are more likely than ever to get into a truck accident.

You are so much more than just some truck accident statistic! To get connected with a truck attorney who can properly handle your claim, get in touch with LegalFinders today.

With its geography and extreme weather conditions, Minnesota highways can be scary. A recent study by the Minnesota Department of Transportation reported at least five major highways/ roads that are at higher risk for fatal crashes. We’ve listed some of the most dangerous Minnesota roadways below:

Many people have been in traffic accidents and they usually have the same frequently asked questions; we’ve answered some for you below:

I have been involved in a traffic accident. What do I do now?

Traffic accidents can be overwhelming. You need to seek medical attention immediately following the motor vehicle accident and can do so by contacting emergency services. Your injuries could be obvious or you could feel initially unaffected at the time of the accident but in either case you still have to see a medical practitioner and be examined. Take photos of the location and circumstances of the accident, taking care to capture details such as individuals, damages, and injuries. If you can’t take the photos yourself due to injury, entrust a loved one to document the scene with your camera.

After you’ve gotten the authorities involved and they’ve properly documented the crash scene, your next step is to file a truck accident claim with your insurance company, even if you’ve only sustained either personal injury or property damage. The best way to do this is through a truck crash lawyer who can help you determine your legal rights and course of action. Our LegalFinders service makes it easy to consult with accident attorneys who can relieve the stress of sustaining an injury and navigating a lawsuit. Call us today to get started with a free case review from a legal team that is the right fit for your situation.

What are the most common causes for Minnesota truck accidents?

Truck accidents are almost always more likely to result in a serious injury or death than any two-passenger vehicle crash.

Many vehicles, such as “big rig” tractor trailers, semi-, and commercial trucks can weigh upwards of 30,000 pounds. Driving in or near a larger sized vehicle increases the chances of a fatal collision. Beyond weight concerns related to driving large commercial trucks, there are various ways in which truck drivers can end up in an automotive accident. There are situations in which an accident is not caused by negligence but by just unavoidable circumstances. Some situations which may result in a truck or vehicle accident include:

You can be entitled to compensation for recoverables and all damages, losses, and expenses sustained as a result of your truck accident. If you don’t know where to go or what to do next when filing a personal injury claim then it’s in your best interest to work with a Minnesota attorney that can help you make the best choices.

A personal injury is any injury that you end up with due to some sort of accident, such as a truck collision. Almost any injury you sustain will result in pain and suffering. There may also be a chance that your injuries go undetected for hours, days, or weeks and then cause life-long medical costs or the need for rehabilitation. Treating an injury can be costly on its own but can also become expensive due to the cost of lost wages and short term disability insurance. All of these combined expenses can lead you to financial trouble.

It should go without saying that insurance companies play to their own interests with their adjuster employees who offer the least settlement amount they can for your claim. To find the best personal injury attorneys in your area, make sure that you contact LegalFinders. If your claim is underpaid or not at all and you can’t afford the cost of expenses then retaining a personal injury attorney to help settle your claim is your best choice.

What are common injuries that can result from truck related accidents?

A truck accident will usually result in some of the most ghastly personal injuries that victims can suffer from. Commercial trucks and two-door passenger vehicles have a significant weight difference but the size alone can create lasting damage and impact. We’ve listed some of the most common severe injuries that can be the result of a truck or vehicle accident:

The best way to get recompense for the injuries you’ve suffered and the impact to your life is to file a personal injury claim for settlement. Having an experienced Minnesota truck accident lawyer on your side raises your odds of receiving fair treatment from insurance companies and a winning settlement.

What if I don’t feel hurt?

Regardless of how you may or may not feel after a truck collision, it is still imperative that you receive immediate medical attention when you’ve been in an accident. Injuries can take anywhere from hours to days to weeks to appear and it’s not uncommon for symptoms to be delayed. Your injuries may present themselves after being agitated by your work or lifestyle movements. Even if an insurance company refused to pay out a claim you shouldn’t have to live with chronic pain and/or invisible injuries after a car accident.

You need to be examined by a doctor after your car accident so that they can document your injuries well. Any trips you may have taken to the doctor regarding your vehicle accident injuries need to be documented as well and be sure to include bills you receive and other related expenses in your insurance claim documents.

What is the statute of limitations for personal injuries in Minnesota?

How do I know who is at fault?

Fault in a vehicle accident is assessed by what kind of state you live in, either a no-fault or at-fault state.At-fault states follow a tort system, meaning that fault is assigned based on the circumstances of the accident. The insurance of the party deemed responsible for causing the accident is required to pay out claim expenses such as bodily injuries, lost wages, and property damage.Be sure to get in touch with an excellent Minnesota accident lawyer by calling LegalFinders today.

Is Minnesota an at-fault or no-fault state?

LegalFinders alleviates the stress of getting these answers, and others, by doing the search work for you.

To handle the number of claims they receive daily, big trucking companies have in-house legal counselors that offer them advice and guidance. You should also be able to receive the same kind of help on your truck accident case with an attorney who is experienced and understands how devastating the effects of a collision can be, causing serious injuries and property damage.

You should feel like you’re in good hands, and LegalFinders will prove that to you by putting you in touch with the best personal injury lawyers possible to handle your accident claim. We only partner with successful accident and personal injury firms.

LegalFinders focuses on the crucial elements of a good attorney-client relationship. The Minnesota truck accident attorneys that we have to recommend will strive to fight for your rights as the victim of an accident. If you were at-fault or not, partially or not at all, our network of legal partners will defend your claim. Our attorneys are very familiar with the most common causes of truck accidents such as an improperly secured vehicle or driver fatigue.

No matter your level of coverage or insurance provider, LegalFinders can support your legal needs by connecting you with expert guidance through our professional accident attorney network. If you find yourself uninsured but were in a truck or car crash due to another party’s negligence we can help. LegalFinders knows how important it is that you have the right attorney for your situation.

On Page TopicsOffering the best big rig, semi-truck and truck attorney network in Minnesota.Minnesota Vehicle Accident StatisticsMost Dangerous Minnesota HighwaysFAQsLegalFinders alleviates the stress of getting these answers, and others, by doing the search work for you.