Were you or a loved one hurt by an airbag during an auto accident? Learn your legal options when you talk with a car accident lawyer. Depending on how and why the airbag deployed, as well as other factors, you may be able to get compensation to cover medical bills and other costs from the accident. 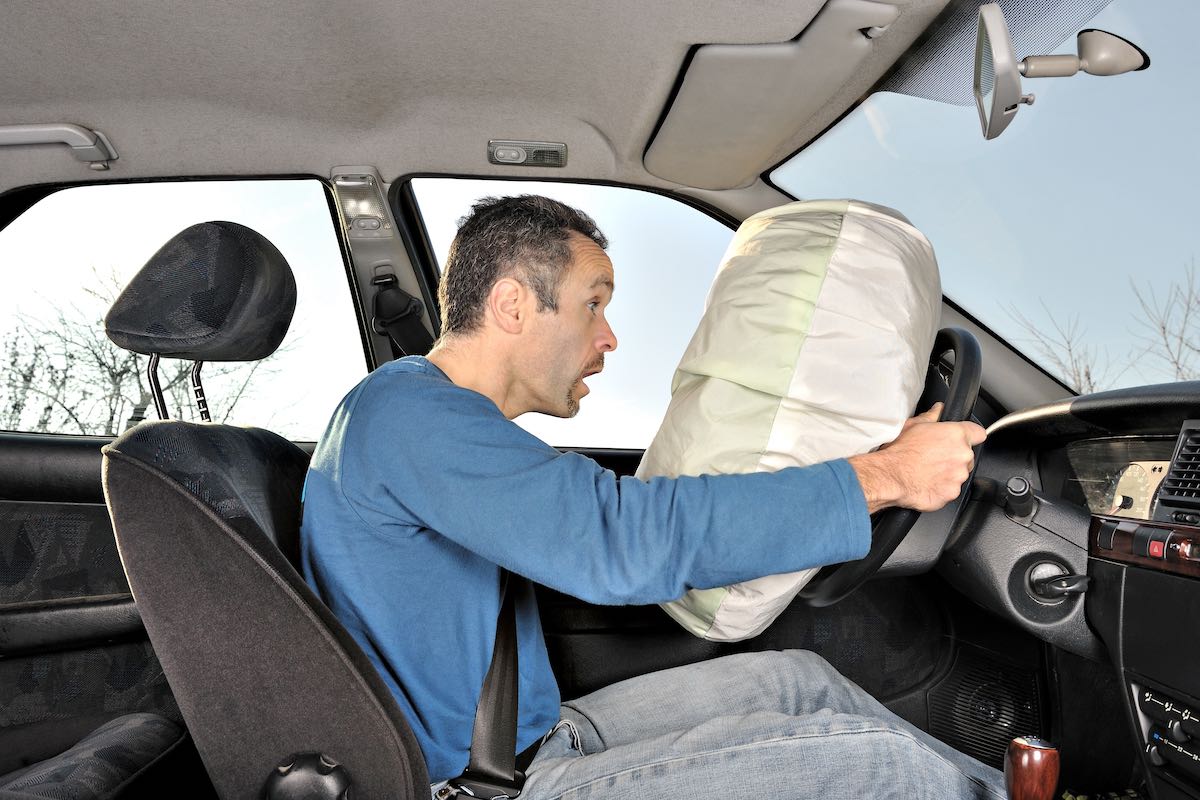 LegalFinders: Find the best airbag deployment injury attorneys near you.

That is, if the airbag properly deployed during a self-crash, i.e. you crashed into another vehicle, then you may be liable for your own injuries. Yet if someone else hit you and caused you to become injured by your airbag due to the crash, the negligent driver is likely the liable party. This means you could file an injury claim against them for damages.

In contrast, if there is an airbag failure in your vehicle due to faulty airbags installed by the manufacturer, and you become injured as a result, the vehicle manufacturer and/or airbag manufacturer may be held liable as a result. This may be true regardless of how or why the crash occurred.

Because airbags are meant to protect vehicle occupants during one of the most dangerous scenarios possible, the very nature of airbag deployment, which occurs at impossible speeds, means some minor injuries may be unavoidable.

However, if you have experienced eye injuries, brain injuries, or other airbag accident injuries, you may have a personal injury case.

The most straightforward explanation for an airbag deployment is a vehicle accident — or a collision of some kind that creates an impact great enough to lead to the deployment of airbags.

In a vehicle with properly working airbags, the airbags will only deploy if the vehicle’s crash sensors accurately detect the correct speed, braking level, and impact of the crash. The airbag system sends a signal to the airbag module — letting it know it should deploy.

That is, airbags work by inflating once the crash sensors are tipped. The inflation is caused by a chemical reaction, usually the release of a gas. Airbag deployment typically takes less than 1/20th of a second. The airbags deflate once they make impact with the driver or passenger.

Faulty airbags are rare, but they do happen, and generally result from a faulty sensor or other faulty part in the airbag system. Airbags should be replaced after they have deployed. When they aren’t replaced, they may not deploy properly in the event of a car crash, which could lead to devastating results for the accident victims.

Types of Car Accidents That May Cause An Airbag to Deploy

In general, frontal airbags may deploy during any type of collision that is the equivalent of your vehicle hitting a rigid wall at 10-12 miles per hour (mph). Different types of airbags may deploy at different speeds, but the threshold is low for all airbags, since these safety devices are designed to keep you from making contact with the vehicle and suffering serious injuries.

If a side airbag or frontal airbag deployed when it shouldn’t have and caused you or your family member injury, it may help to speak with a personal injury attorney to learn your legal options.

Injuries That May Result from Airbag Deployment

Airbag Statistics in The U.S.

The first prototype for the modern airbags currently in use in motor vehicles was patented in 1953 in Pennsylvania, according to Consumer Affairs.

Since then, airbags have come a long way — with estimates by the National Highway Traffic Safety Administration (NHTSA) claiming airbags have saved the lives of more than 50,000 people from 1987 to 2017 alone. Other important statistics regarding airbags in the United States include:

While the cause of your injuries may be apparent to you, it may be difficult to prove they were caused by the airbag, specifically. Further, the defendant’s personal injury lawyer may work to prove that your injuries could have been prevented by avoiding the crash altogether.

This is why it’s important to work with a reputable law firm, where you can bring on an experienced airbag injury lawyer. Among so many other tasks, your lawyer will help you prove how your injuries were caused by the airbag.

If it’s a matter of a defective safety feature within the airbag, your lawyer can help you begin a product liability case against the airbag manufacturer or vehicle manufacturer. If a vehicle seller knew the airbag had been used and failed to replace it, you may be able to begin a personal injury lawsuit against the vehicle retailer.

Learn more about airbag deployment injuries and related personal injury cases by browsing the list of commonly asked questions below.

What types of injuries can be caused by airbag deployment?

Any number of injuries may be caused by airbag deployment, especially if due to a defective airbag issue, like an explosive deployment. Some reported injuries due to airbags include:

What happens to your body when an airbag deploys?

With frontal airbags, they usually hit your face first in the event of a collision. While this stops you from hitting the steering wheel or dashboard, or going through the windshield, it can also cause you injury.

In addition, the combustion from the deployment can cause irritation to your eyes and lungs. It may also injure your eye, cause you a concussion, or even lead to temporary or permanent blindness.

Airbags deploy so fast that the impact of the airbag on your bare skin, or causing your clothes to rub so harshly against your skin, can cause a burn similar to road rash or rug burn.

While rare, the severe impact of an airbag on your abdomen could cause internal bleeding, bruising, tissue damage, or even organ damage.

Overall, the airbag may halt a fatal injury, but it may also lead to serious injuries, some of which can have lasting effects.

At what speed do airbags deploy in a car crash?

Most frontal airbags deploy when a vehicle crash occurs that is equivalent to the car running into a rigid wall at a speed of 10-12 mph, for occupants not wearing their seat belts. When occupants are properly restrained, the deployment speed threshold is about 16 mph.

The deployment speed threshold may be as low as 8 mph or as high as 18 mph, and airbags typically go off within 10-20 milliseconds of the crash, according to the Insurance Institute for Highway Safety.

Can an airbag hurt your chest?

An airbag can cause pain in your chest when it deploys, as well as to your face, head, neck, arms, and even torso. Many people experience burn injuries due to the combustion reaction of the airbag when it deploys. You may also experience bruising and soreness, which typically is at its worst in the first 24-48 hours, and mostly subsides after about 72 hours.

How many people have died from defective airbags?

National crash data from the National Highway Traffic Safety Administration reports that between the years of 1990 and 2008, approximately 290 people died from airbag injuries (not related to airbag defects).

More recently, 24 people were fatally injured and 300 were injured due to defective airbags which would explosively deploy. These frontal airbags were installed in more than 41.6 million vehicles nationwide, by more than 19 vehicle manufacturers.

Despite fatalities, airbag manufacturers and the Department of Transportation stress that defective explosions are rare, and airbags are estimated to have saved more than 50,000 lives between 1987 and 2017.

Do airbags really save lives?

In general, airbags truly can save lives. In fact, the NHTSA estimates that airbags reduce driver fatalities in frontal crashes (such as head-on collisions) by 29 percent, and front-seat passengers ages 13 and above by 32 percent.

In many cases, airbags cause injuries only when vehicle occupants hit by the airbag are unrestrained. They may also injure a person if they are not old enough or physically developed enough to take the impact of the airbag (i.e. small children).

Airbag deployments are rarely fatal. However, if you or a loved one has been injured by an airbag, you may have legal options.

LegalFinders can help you find a top airbag injury lawyer in your area.

Whether you are facing emotional pain and suffering after an airbag injury, or lost a loved one due to a defective airbag and want to file a wrongful death claim on their behalf, LegalFinders may be able to help.

We can connect you to a law office near you with highly trained personal injury lawyers who are ready to get to work on your case. During a free case evaluation, they can review the details of the accident to help you seek fair compensation for an airbag injury. Learn more today. Contact us now for a free initial consultation to begin.

On Page TopicsFind the best airbag deployment injury attorneys near you.Causes of Airbag DeploymentTypes of Car Accidents That May Cause An Airbag to DeployInjuries That May Result from Airbag DeploymentAirbag Statistics in The U.S.Legal Options for Airbag Injury VictimsWhat types of injuries can be caused by airbag deployment?What happens to your body when an airbag deploys?At what speed do airbags deploy in a car crash?Can an airbag hurt your chest?How many people have died from defective airbags?Do airbags really save lives?LegalFinders can help you find a top airbag injury lawyer in your area.