Have you or a loved one suffered from a personal injury as a result of a motorcycle crash? If you feel like you’re in a constant state of emotional distress, look no further, the law experts at LegalFinders are here to guide you in the right direction. Compiling the top data in your area, LegalFinders makes the process of finding a New Hampshire motorcycle accident lawyer hassle-free. Don’t wait, contact LegalFinders today for your free consultation. 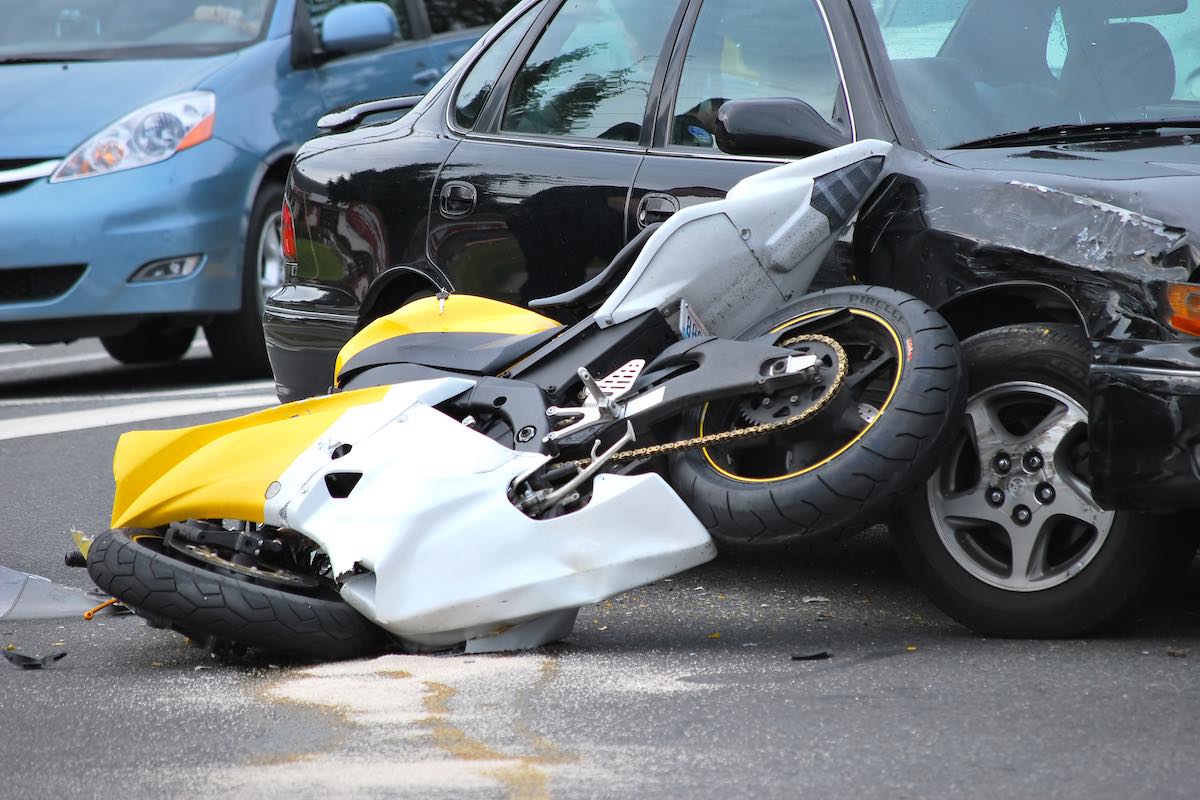 Being the owner of a motorcycle can be appealing for a number of reasons. The most common are experiencing a sense of freedom, the versatility a motorcycle has to offer, along with reduced costs. Owning a motorcycle certainly has its perks, however, it’s important to be aware of the crucial risks in safety that come with that ownership. Motorcycle accidents are known to cause some of the most life-altering injuries.

Recent research concluded there are nearly nine million registered motorcycle owners on the roads nationwide. It’s known that motorcyclists are nearly 40 times more likely to die in a crash than a passenger in an automobile per mile traveled and four times for likely to be injured. On average, about 90,000 motorcyclists are injured per year; with nearly 5,000 of those collisions being reported of a fatal nature.

It’s imperative that all motorcycle owners/operators become educated in the risks involved with motorcycle crashes. Due to the vast amount of motorcycle accidents being reported nationwide, lawyers are quickly becoming available and willing to take on motorcycle accident cases. Additionally, many insurance companies have a backlog of personal injury cases and other claims, meaning it could take weeks or months for the company to get to your claim.

In need of a trustworthy and proven legal representative in the state of New Hampshire, get in touch with LegalFinders today. We can help connect you to an experienced attorney who can ensure you’re treated fairly and that you receive the maximum compensation available for your crash.

Given that there are around 6.2 million motorcyclists in the United States alone, it’s no surprise the number of motorcycle fatalities and injuries that arise per year. Due to negligent drivers, road conditions, and improper safety and training, the National Highway Traffic Safety Administration (NTHSA), reports about 74 fatalities per 100,000 registered motorcycles.

The state of New Hampshire has a traffic fatality rate that is better than 37 other states. However, even though New Hampshire has safer roads than most states, it is the only state in the country that does not have a seat belt law. Nearly thirty percent of New Hampshire residents don’t buckle up when they get behind the wheel. In 2017, the average seat belt use in the other 49 states was 88.25 percent, which looks remarkable compared to New Hampshire’s careless 67.60 percent. Below take a look at New Hampshire’s deadliest intersections:

What Should I Do After A Motorcycle Collision?

After a motorcycle collision, the first thing you’d want to do is call 911 immediately. The police will take all necessary documentation of the scene to determine the cause, as well as who is at fault. Keep in mind, not all motorcycle accidents involve another driver; for example, hazardous road conditions could contribute to a motorcycle crash.

Once the police have finished all necessary documentation and fault is assessed, the next step is to seek medical treatment as soon as possible. It will be most likely that the police officer on the scene will call an ambulance for any and all motorcyclists or injured car accident victims to be transported to the hospital for further evaluation. It’s important to still visit the hospital even if you feel like you haven’t sustained any bodily injuries during the motorcycle collision.

Most people think a personal injury is defined by the severity of the injury. When is actually a personal injury is any injury that is sustained in a motorcycle accident or other types of collisions where the end result is pain and suffering. The most important thing you can do after a motorcycle collision is being checked out by a medical professional. Certain accident injuries like whiplash, concussions, and soft tissue injuries can take several hours or even days to appear. Some people may even go into shock after an accident due to injuries they aren’t aware of until later on. Medical treatment after the accident will also prove to the insurance company that your injuries were a direct result of the crash.

With personal injuries come imposing medical bills and often dramatic changes to a person’s way of life. For example, some people are unable to care for loved ones after an accident, or are unable to work and bring in income to support their family. All of this will be taken into consideration when you file a claim.

What Are Examples Of Motorcycle Accident Injuries After A Collision?

Motorcyclists can experience mild to severe injuries in an accident. Some examples of injuries that can happen in a motorcycle accident include:

Is New Hampshire An At-Fault State?

In the state of New Hampshire, the law does not require drivers to carry car insurance. However, it would be wise to have car insurance in New Hampshire since this state follows a traditional fault-based system. Any car accident injuries, loss of income, vehicle damage, and whatever else ends up being the result of a car accident, it is the faulty party who is financially responsible for those losses.

In the state of New Hampshire, an accident victim has one of three ways in which they can proceed:

When Should I Contact A New Hampshire Motorcycle Accident Lawyer?

The time to contact a New Hampshire motorcycle accident attorney for an initial consultation should be as soon as possible following the accident. Making initial contact, will ensure you are gaining the support you need for your motorcycle accident claim from the very beginning, and receive helpful legal advice throughout your claims process.

In most cases, other motorists only choose to reach out to a motorcycle attorney when their claim has been denied or they feel like they did not receive a fair settlement for their losses. For instance, if the bikers’ insurance company refuses to pay out a compensation amount that fully covers their losses, medical expenses, and other damages, contacting an attorney is a good idea to ensure your rights are upheld and you receive a fair settlement.

What Are The Statute Of Limitations For New Hampshire?

The statute of limitations “catch-all” three years, applies to most “personal actions”. Meaning it covers almost all lawsuits arising from a motor vehicle accident; including those over car accident injuries and damages to vehicle or property. For example, if anyone was injured in a crash, or had their vehicle or other personal property damaged, they must file their lawsuit against any potential defendants within the three-year time limit. The same time limit applies if someone died as a result of the car accident and their family member or representative of the estate wants to file a wrongful death claim against the faulty party. However, the time limit doesn’t begin until the day of the accident victim’s death.

Make sure you leave yourself enough time to file a lawsuit even if you are confident your case will be resolved through the car insurance claim process. If you think you could be running up against the filing deadline, contact LegalFinders today and get in touch with an experienced New Hampshire motorcycle accident attorney.

How Do I Select A Personal Injury Attorney?

When selecting a personal injury attorney in New Hampshire, you want to look at their history. Choosing a lawyer can be a tricky thing, but you want a lawyer or legal team with years of experience working with motorcycle accidents and personal injury law. Whichever route you choose, the law firm or individual should have a proven record of winning cases similar to yours.

If you’re undecided about the attorney to choose, reach out to LegalFinders to get matched with the right personal injury attorney for your particular case. It’s important to choose a lawyer in your area who is familiar with New Hampshire motorcycle laws, in terms of motorcycle accidents. The lawyer can provide you with a free case evaluation and inform you of the next steps you should take.

LegalFinders Reduces The Challenges Of Getting These Answers, And Others, By Doing The Search Work For You

No matter who was at fault, the dedicated law offices at LegalFinders will support you every step of the way. Being a trusted source for finding lawyers who are familiar with personal injury and motorcycle claims who are located in your area. LegalFinders does the work for you so you don’t have to and your sole focus can be on recovering and reclaiming your life after a collision.

Additionally, we work with clients who have insurance coverage as well as those who don’t. No matter what situation you’re in, LegalFinders is here to help.

On Page TopicsOffering The Best Motorcycle Accident Attorney Connections In New HampshireNew Hampshire Motorcycle Crash StatisticsMost Dangerous New Hampshire RoadwaysFAQsLegalFinders Reduces The Challenges Of Getting These Answers, And Others, By Doing The Search Work For You