Being involved in a motor vehicle accident with a big rig can be life-changing. If you or a loved one have suffered injury or property damage in the wake of a truck crash, an experienced truck accident lawyer can provide the legal advice you need to successfully file a claim. 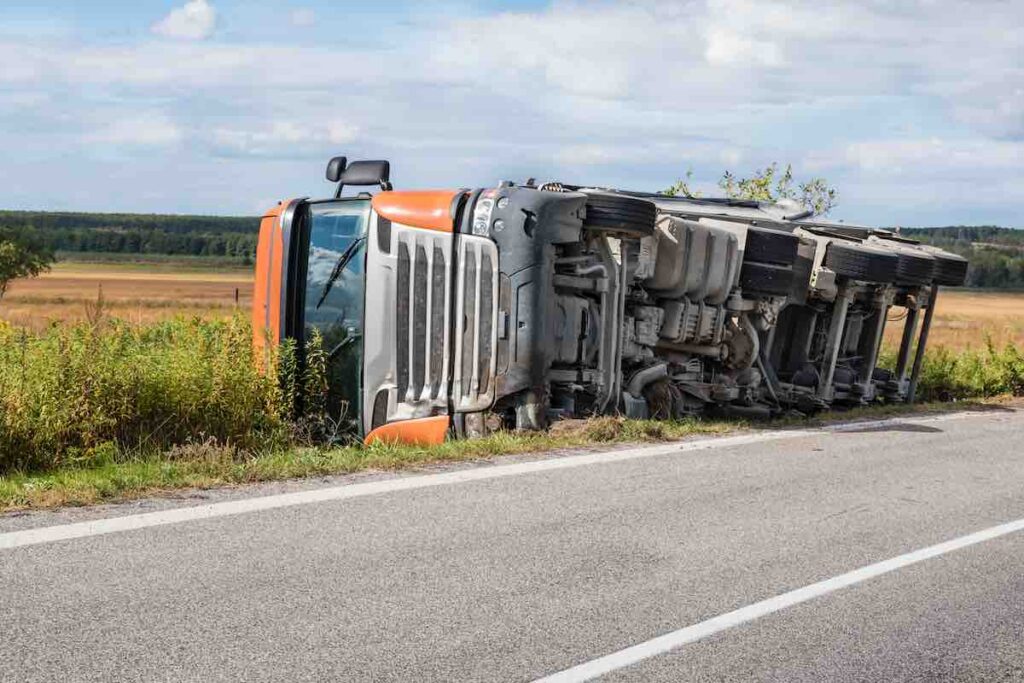 If you or a loved one have been involved in a truck crash while traveling through Arizona, you may be entitled to compensation. Top-rated personal injury lawyers across Arizona can help build your case, whether you live in Phoenix, Scottsdale, Tucson, or anywhere in between.

Who Is At Fault For Large Truck Accidents In Arizona?

It may seem easy to assign fault in the case of a collision between a large truck and a passenger vehicle, but there are actually a number of legal factors to keep in mind.

Fault is issued on one of several different levels, which speak to the intentionality of the actions leading up to the crash, including:

Plus, most personal injury cases also consider the issue of liability — a legal definition that covers a wider range of actions and parties which could have contributed to the situation that ultimately caused the accident.

A truck driver will be found liable for an accident if he or she was participating in dangerous and avoidable behavior leading up to the crash, or if they were found to have been negligent, careless, or reckless on the road.

In these types of auto accident cases, it’s not just large vehicle operators who are potentially on the hook. Other drivers on the road may have behaved in ways that led to an accident, and poor weather conditions can also be in play.

Top personal injury attorneys who specialize in these types of cases will look beyond an accident scene for potential liable parties, which could include a number of other people or institutions.

Trucking companies have a number of responsibilities which leave them at risk for being found liable in these cases.

If they fail to require drivers to have proper training, ensure all systems are safe, or properly maintain their vehicles, they could potentially be included in a personal injury case.

The same goes for local, state, and national government offices. In cases where unsafe road conditions played a role in the accident, these institutions could be brought to court, as they are responsible for designing, building, and maintaining safe and reliable roads.

Regardless, any parties found liable in these cases will be those responsible for paying damages.

What Are Your Legal Options After Being Injured In An Arizona Truck Accident?

Truck accidents unfortunately often lead to severe injury, but these cases do leave you with some legal recourse.

A free consultation will help a legal team get to know the details of your case, and, if you choose to continue working with them, they can help you start determining the type of compensation you may be entitled to.

Once you’ve settled on a law firm, you can begin the process of filing an injury claim.

Your attorney will know how to handle your claim and help you gather the appropriate evidence, file the claim, and potentially file a lawsuit, in the case of parties being unwilling or unable to settle out of court.

Many law offices representing truck accident victims will try to negotiate a settlement out of court. In these situations, your truck accident lawyer will reach an agreement with the other parties’ attorneys about how much compensation is owed, and by which parties.

Sometimes, however, these negotiations break down. In these cases, you’re still not out of legal options.

In the case where the parties involved can’t see eye to eye, you can bring your case to open court, where a judge or jury will determine fault and any compensatory damages.

What Can Affect Your Truck Accident Claim?

Each case is different, and a number of factors may impact not just your personal injury claim, but the verdict that is officially rendered in your case.

Some of the biggest issues impacting truck collision cases include:

If you or a loved one have been injured in a crash with a large commercial truck, you can seek financial compensation for your experience.

These payments are called damages, and they’re meant to cover all the costs you incurred in the accident, whether they be financial, physical, or emotional.

In cases where the truck accident resulted in any physical injuries, you could receive damages for medical treatments or any related medical expenses you incurred, including for:

Lost wages are damages related to missing work in the wake of a serious car accident. If injuries sustained in the crash caused you to miss work, you may be able to seek compensation for:

In the case where a catastrophic injury left you unable to return to your job or pursue a similar line of work, there may be the possibility of seeking additional compensation. This would cover any diminished earning capacity or costs related to changing careers.

While more subjective and difficult to financially tabulate, this category of damages is meant to compensate for some of the most impactful aspects of a truck crash, including:

There’s no way to ever make up for losing a loved one, but these damages are intended to atone for emotional and financial costs of a fatality in a large truck accident, including:

Arizona Laws That May Affect Your Personal Injury Case

Arizona is home to a number of specific laws you’ll have to adhere by when filing your personal injury claim.

The actions of each party involved are taken into account, and liability can be assigned to a number of different parties. You may even be found an at-fault party in your own case, which could affect the amount of damages you’re ultimately rewarded.

Arizona is also an at-fault state, which means the region holds whoever is responsible for causing the car accident ultimately responsible for paying any damages. (This compares to no-fault states, where everyone’s insurance providers cover their own actions.)

In Arizona, the statute of limitations for big rig accidents is two years, meaning truck accident victims have that long to file their claim.

What Injuries Are Caused By Tractor-Trailer Accidents?

A collision with a commercial vehicle can lead to a number of serious injuries, including:

An experienced personal injury attorney will be able to help you seek the proper compensation for these injuries.

The nature and design of large trucks, passenger cars, the motorists who drive them, and the companies who regulate large trucks lead to a number of common causes in these cases.

Careless actions on the part of the truck driver or drivers of passenger cars often lead to an accident.

Typically considered closer to a true accident, errors can include cases of driver fatigue, driving while distracted, or other similarly unintentional situations.

Slightly more serious than driver error, driver negligence describes situations where a motorist’s intentional actions increased the odds of them being involved in a crash.

This can refer to a range of behaviors, including failing to check a blind spot, tailgating, speeding, or even driving under the influence.

A large commercial truck may be loaded in ways that make cargo spill accidents more likely to occur, including:

Generally, a trucking company will be found liable if a truck is found to be improperly loaded. But there are other ways these companies may inadvertently cause accidents, including if they:

Aside from there being a number of common causes of truck accidents, there are also many common types of accidents involving commercial vehicles. These generally include:

As the home to a number of interstate highways and highly trafficked trucking routes, Arizona sees high numbers of trucking accidents.

The state recorded 121,345 total car crashes in 2021 alone, including 1,063 that were fatal, according to the state’s Department of Transportation. Among those, 100,518 were multi-vehicle crashes, which could include a car colliding into a truck.

The state estimates more than 10 billion miles are driven each each in the Phoenix metropolitan area alone.

You are not required to hire legal representation in the case of a truck accident, but the practice is undoubtedly beneficial.

Law firms or legal teams that specialize in these cases have years of experience, allowing them to understand semi-truck accidents, how they occur, and what it takes to build a strong case.

A semi-truck accident lawyer will also know how to look for damages, who could be named a liable party, how to interpret police reports, and which type of evidence will be needed to best present your case.

Plus, many of these law firms have previous interactions with a number of insurance companies and trucking companies, which can help in the negotiation process.

When determining how best to deal with a large truck collision, you may have a number of questions.

Do Semi Trucks Cause More Accidents Than Other Vehicles In Arizona?

Arizona keeps track of vehicle crashes by year, but the state’s Department of Transportation doesn’t take into account whether commercial vehicles were involved in those crashes.

Are Semi-Truck Accidents Common In Arizona?

An official total is hard to come by, but previous estimates have named the portion of Route 10 that runs through Arizona one of the deadliest stretches of road in America.

What Are Common Types Of Truck Accidents?

What Causes Most Truck Accidents?

While nearly any type of behavior or situation could ultimately lead to a truck accident, distracted driving is on the rise across the board, leading to more than 3,000 deaths in 2020 alone, according to the National Highway Traffic Safety Administration (NHTSA).

What’s The Average Settlement For A Truck Accident Case In Arizona?

Every case, and its potential settlement, is different. An experienced truck accident attorney will be able to determine the amount of damages you may be entitled to.

Connect With The Best Truck Accident Lawyers In Arizona

Truck accidents can be devastating to encounter, but an experienced truck accident attorney may be able to help you get the compensation you deserve for your experience.

If you or a loved one have been injured in a large truck accident in Arizona, LegalFinders can help you find a top law firm to help you build the strongest case possible.