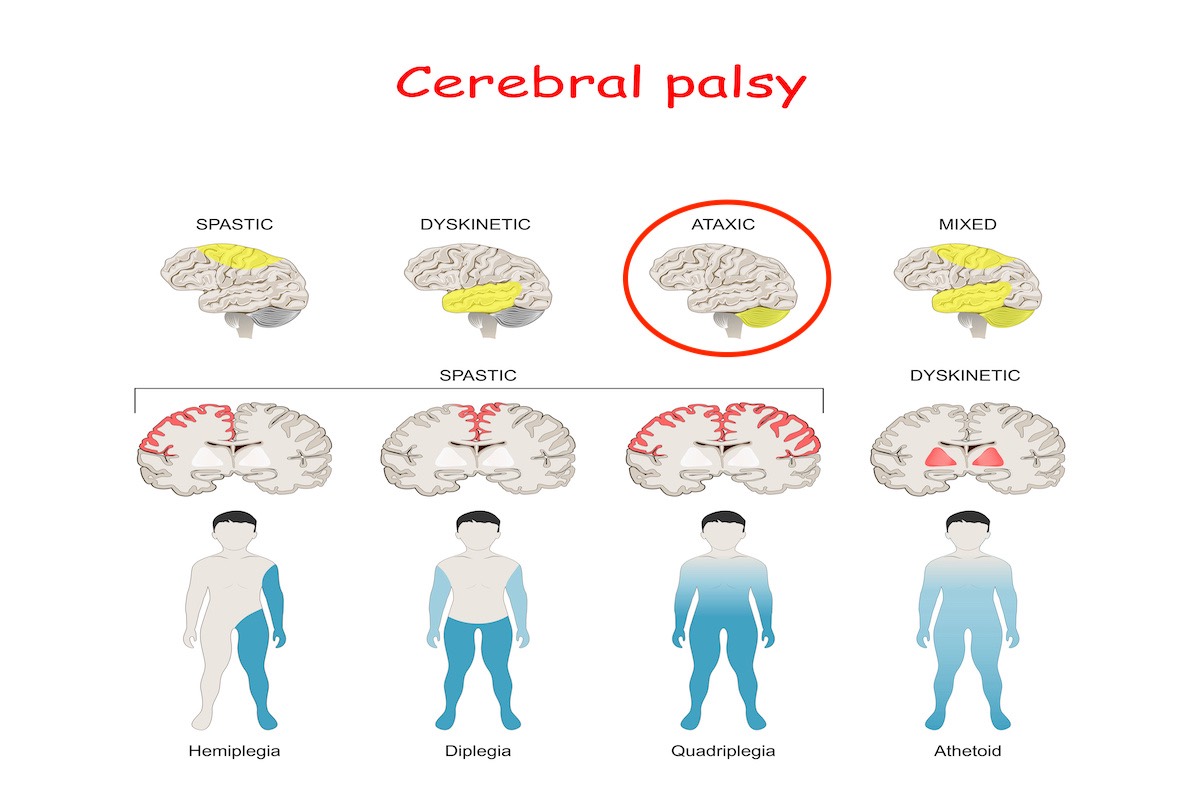 What is Ataxic Cerebral Palsy?

People who have this type of cerebral palsy have suffered damage to the cerebellum. The cerebellum modifies motor commands initiated by descending pathways in the brain, ensuring that movements are accurate and adaptive. The cerebellum is responsible for a variety of functions:

The way that ataxic cerebral palsy affects a person’s balance, coordination and depth perception manifests itself in several ways. These ways include unsteady walk, difficulty performing tasks requiring fine motor skills and uncontrollable shaking during deliberate actions, such as reaching for an object.

This interference affects coordination and balance and can also affect a person’s hands and fingers. Parts of the face, head and throat can also be affected by ataxic cerebral palsy, causing people who have this condition to experience difficulty moving their eyes where they want, swallowing and speaking.

Quick and precise movements, such as fastening buttons, tying shoelaces, or writing a sentence, may be especially challenging for children who have ataxic cerebral palsy. Children may also struggle to control the movements of their hands and arms when performing voluntary actions such as reaching for a toy or a piece of food.

Although these symptoms never disappear, they may improve over time with the aid of various treatments. Although certain symptoms are common, specific symptoms and their severity vary from person to person.

Although children do develop at different rates, parents should closely monitor the rate at which their children meet milestones. A child who moves, sits, and masters’ other basic skills more slowly than expected might have ataxic cerebral palsy or another type of cerebral palsy.

Ataxic cerebral palsy is permanent, but there are many different types of therapy for cerebral palsy that can help enhance the lives of people who live with this condition.

Through resistance and strength-training exercises, people who have ataxic cerebral palsy can improve their balance, motor skills and muscle strength. Physical therapy can also help prevent contractures. Orthotic devices may be used to complement physical therapy.

Occupational therapy can aid development of an ataxic cerebral palsy patient’s small muscles and postural tone. This type of therapy teaches participants daily living skills, such as eating, dressing and bathing. Patients can also learn techniques that can help make some tasks easier, such as writing and scissors use. Splints may also be used during occupational therapy to make people who have ataxic cerebral palsy more independent.

People who have ataxic cerebral palsy may have mild speech problems. These problems can often be corrected or improved by working with a speech therapist.

Understanding more about ataxic cerebral palsy, its symptoms, and its treatments is important for anyone who knows or cares for someone who has this type of cerebral palsy.