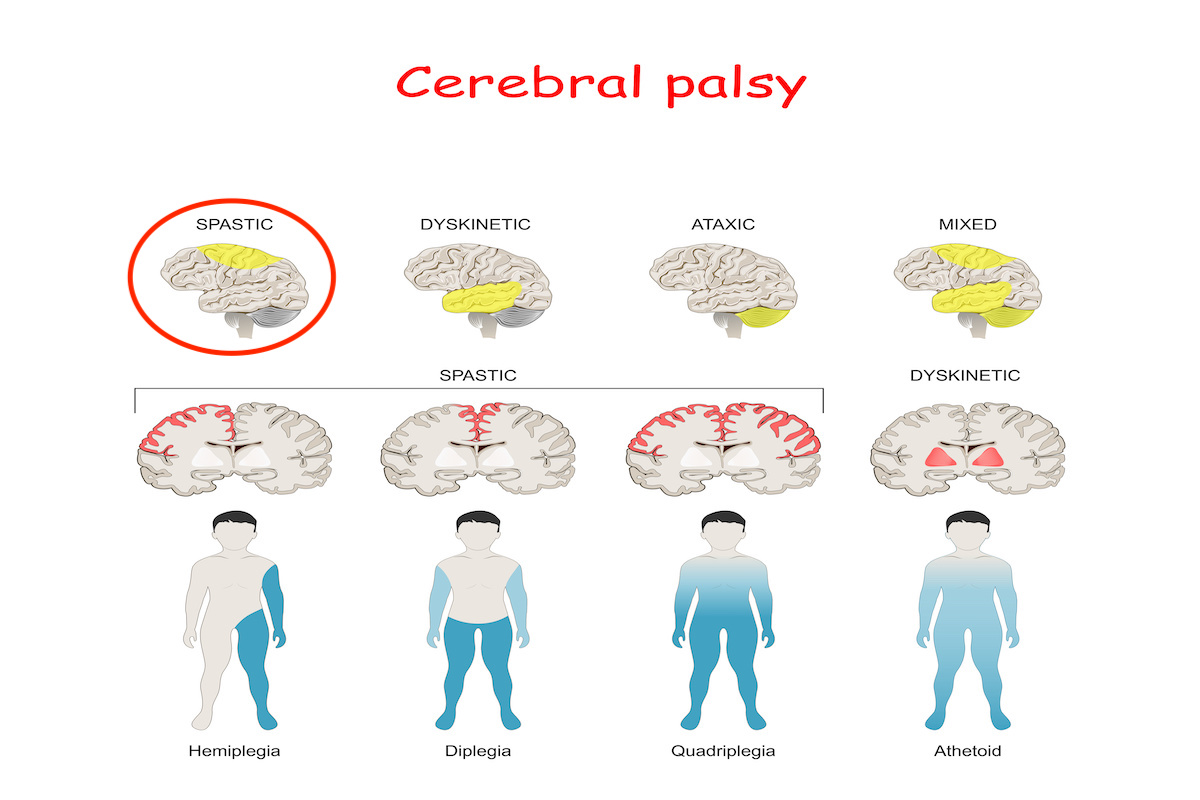 What Is Spastic Cerebral Palsy?

Spastic cerebral palsy is the most common form of CP, representing at least 70% of diagnoses. Cerebral palsy is a group of disorders primarily affecting muscle coordination, balance and voluntary movement. The neurological condition typically appears in infancy or early childhood, resulting from irregular development or damage to the part of the brain responsible for mobility. Although a formal diagnosis may be delayed by months or years, most cerebral palsy patients are born with the disorder.

Spastic cerebral palsy occurs when a damaged part of the brain sends the wrong neurological messages, impeding normal development of motor functions. Specifically, the disorder can be partially attributed to damaged brain and spinal cord neuron bundles in the pyramidal tracts, where the corticobulbar and corticospinal tracts are involved with motor control.

Muscle stiffness and tightness are primary symptoms of spastic cerebral palsy, resulting in jerky movements and exaggerated reflexes. Other symptoms are highly individualized, impacting each patient in unique ways. For example, it is thought approximately one-third of individuals affected by the disease experience seizures.

Among children afflicted with the spastic type of CP, muscle tightness and poor coordination during deliberate movements are consistent, dominant symptoms; compared to ataxic and athetoid cerebral palsy, which may display a slightly different set of principal indications. The spasticity associated with CP can affect any muscle group, but certain patterns are seen across those with the disorder.

As is the case with other forms of CP, those with the spastic type are susceptible to co-occurring conditions, which can impact vision, hearing, swallowing, as well as bladder and bowel functions and other physical systems. Difficulty reasoning and slow development are also seen in some babies and young people diagnosed with CP. Children diagnosed with cerebral palsy commonly experience involuntary and unpredictable movements, and individuals with severe cases may not be able to walk.

Spastic quadriplegia is a specific type of spastic cerebral palsy that refers to difficulty in controlling movements in the arms and the legs. Those who experience this form of Cerebral Palsy will not have paralysis of the muscles, but rather jerking motions that come from stiffness within all four limbs. Just like general CP, children will display symptoms early on in life, and the movements will hinder normal development. The National Institute of Health states that there are generally four causes to spastic quadriplegia: damage to a certain part of the nervous system, general brain damage, bleeding in the brain or a lack of oxygen to the brain.

Spastic quadriplegia will normally affect the whole body, even though the name refers to the four limbs on the body. The facial muscles and the core of the body are unable to perform their normal functions due to the intense amount of muscle tightness and strain.

Typically you’ll see symptoms anywhere from three months to two years old. Infants may be unable to control their head or make scissor-like motions with their legs, where their legs come together then cross at the knee. They will be unable to stand or crawl by 12 months, and they’ll have trouble stretching or moving. Their muscles may contract and relax quickly, or there may be general tautness in the muscles that leads to structural damage in the core of the body. It can make it difficult to sit up or control bladder or bowel function.

This form of Cerebral Palsy affects the lower portion of the body. Known as diplegia, this will affect two of the limbs (the legs) rather than the whole body. About one in five children with CP have spastic diplegia, which is also known as Little’s Disease, named after the doctor who first wrote about this form of Cerebral Palsy. It is less severe in nature than spastic quadriplegia.

Children with this form will show signs and symptoms within the first few years, and will display many of the same scissoring or contracting symptoms that a child with quadriplegia will exhibit. According to the studies published by the National Center for Biotechnology Information, children with spastic diplegia may see many of the other developmental conditions as those with quadriplegia, including vision problems.

Typically, the upper extremity is much more affected than the lower extremity with this form of Spastic Cerebral Palsy. This form impairs the ability of the brain to send proper nerve signals to the patients muscles. Spastic hemiplegia is a rather common form of Cerebral Palsy.

Cerebral palsy represents the most prevalent childhood disorder impacting motor function and development. The term refers to several types of neurological impairments, each marked by particular signs and symptoms.

Cerebral palsy typically results from damage to the brain during pregnancy or childbirth and less frequently from trauma or injury during early life. According to the United Cerebral Palsy Association, about 10% of U.S. children with CP acquire it after birth.

Most cases of cerebral palsy were once thought tied to childbirth complications, during which babies were deprived of oxygen. Modern research points to a different conclusion, however, with the National Institute of Neurological Disorders and Stroke now attributing only about 5-10% of cases of CP to incidence of birthing complications.

As its name indicates, CP affects the brain’s cerebrum. This part of the brain controls voluntary movement, and is integral to many other functions. In addition to mobility, the cerebrum influences cognitive processes and emotions, as well as certain aspects of vision, speech and hearing. Patients are susceptible to problems in all of these areas.

As many as 10,000 infants receive a CP diagnosis and approximately 1,500 preschoolers in the U.S. are recognized as having it each year.

The United Cerebral Palsy Association estimates that more than 764,000 Americans have some form of cerebral palsy.

Data and statistics provided by the Center for Disease Control and Prevention indicate the prevalence of cerebral palsy falls between 1.5 and 4 individuals per 1,000 live births, depending upon the world region studied.

One study conducted by the organization looked at 4 U.S. states, finding a prevalence of 3.1 cases of cerebral palsy per one-thousand 8-year-old children living in the United States. In addition, the data showed CP to be more common among boys than girls and more prevalent among African-American children than their white and Hispanic counterparts.

According to research conducted by the CDC, 77.4% of children identified with cerebral palsy had spastic CP, making it the most prevalent form of the disorder. 58% of the children studied were able to walk independently, though many exhibited co-occurring conditions, including significant incidence of epilepsy and tremors. Severity and location of brain injury are thought to influence how and when symptoms appear.

CP diagnosis is difficult during the first months of life, because the disorder does not become apparent until a child falls short of typical developmental milestones. Over time, signs of the disorder become more evident, pointing to spastic CP as the underlying cause. Noticeable developmental delays most often relate to movement, including difficulties rolling over, sitting up, crawling, standing, and walking. At this stage, doctors look for indications like abnormal muscle tone and postural anomalies to support the diagnosis. A child exhibiting an early hand preference can also be a sign CP is present.

Because of the range of neurological impacts associated with cerebral palsy, symptoms vary widely among the CP population.

Primary symptoms of spastic cerebral palsy include muscle tightness, or increased tone, leading to stiff movements and difficulty executing precise motor control. When upper limbs are involved, flexion is seen at the elbow, wrist and fingers. The bent joints make it difficult to perform certain tasks, particularly when spasticity causes fisted fingers. It can also be difficult to balance when joints are stiff, compounding standing and walking difficulties associated with lower limb spasticity.

When one or both legs are affected by spastic CP, the hips and knees are subject to flexion, causing postural changes and difficulty standing and walking. When a hip is involved, for example, the leg is pulled upward, leading to a forward-leaning posture. In many cases, a scissored gait results from muscle tightness pulling the thighs together. And tight calf muscles can strain leg movement, creating the appearance of walking on one’s toes.

Spastic CP is not a progressive disease, so its underlying neurological causes do not become more severe over time. Symptoms, on the other hand, can change in severity. Spastic CP cases are highly individualized, so treating spastic cerebral palsy is a complex undertaking. Therapy for the disorder strives to improve outcomes, using several key approaches.

Physical Therapy – Because mobility issues are pronounced with the disorder, physical therapy serves as a primary form of treatment for spastic CP. This form of rehabilitation helps strengthen large muscle groups in the legs, arms and abdomen, striving to minimize functional physical deficiencies. Stretching, soft tissue mobilization, endurance exercises and other specialized treatments are used to enhance balance, coordination and flexibility.
Occupational Therapy – This therapy increases strength, dexterity and coordination, fostering the highest possible level of physical functioning at home, school and on the job. But occupational therapy is not limited to physical manifestations of the disorder; the protocol also helps patients with problem-solving, decision-making, memory and other concerns.
Speech and Language Therapy – With so many muscle groups and neurological mechanisms tied to communication; speech difficulties are common among spastic CP patients. Speech therapists not only address speech and language difficulties, but they also collaborate with other medical specialists, working with CP patients to improve swallowing and digestion.
Sensory Integration – Sensory feedback provides essential information to the brain, assisting movement and coordination. Strengthening these connections can be beneficial to children with spastic cerebral palsy, reinforcing their ability to interpret and respond to sensory information.
Orthopedic Surgery – In some cases, surgical intervention provides relief for muscle tightness and related symptoms. The goal of surgery is to increase joint mobility and eliminate pain, as well as mitigating severe limitations and deformity.
Medication – Various muscle relaxants are used to reduce symptoms of spastic CP. Age and severity of the disorder are considered when applying this class of drugs for relief. In addition to pharmacological therapy used to relax muscle groups, additional medication is prescribed, as needed, for co-occurring conditions.

Although the disorder is complex, treatment and therapy help spastic Cerebral Palsy patients overcome symptoms and reach their full potential.